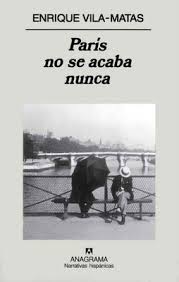 The latest addition to my website is Enrique Vila-Matas‘ París no se acaba nunca (Never Any End to Paris). This is a fun post-modern novel, nominally about the two years the unnamed author, but clearly Vila-Matas himself, spent in Paris writing his first novel. It is told in the form of a three day lecture on irony, though he admits it is really an ironic review, thirty years later, of those two years. We follow his struggles, as he lives in a garret owned by writer Marguerite Duras and his efforts to write a novel, when he has no clue what to write or how to write. He solves the first problem by stealing the plot from Unamuno and structure from Nabokov and various details from his observations and the second by getting advice from Duras and other writers. He channels Ernest Hemingway, initially his idol, and a man he (but no-one else) considers he physically resembles. He tells in-jokes and strange anecdotes. He meets a host of famous people but claims loneliness. He loves Paris but does not like it, though, as Hemingway said, once you have been there, it never ends. He tries to be Parisian but cannot even understand what Duras is saying. He even manages to get himself arrested, when he is mistaken for the famous terrorist, Carlos the Jackal. Is it a factual account of his time in Paris? Almost certainly not but that does not matter, as the border between reality and fantasy is very fluid in the post-modern world. It is, however, a very enjoyable read.