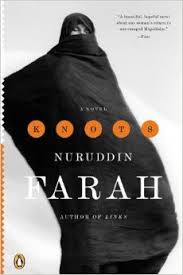 The latest addition to my website is Nuruddin Farah‘s Knots, the second in a trilogy of novels about expatriate Somalis visiting Somalia during the early part of this century, when the situation was really grim. This one follows Cambara, a Somali woman who is living in Canada. She married an expatriate Somali, Wardi, who married her both to get papers to live in Canada and to get hold of some her money. They have a son but he drowns when Wardi, who was meant to be watching him, is busy having sex with a colleague. This is one of the reasons for her visit to Somalia. Others are revealed during the course of the book, including an attempt to recover a property formerly owned by her parents and a guilty feeling that she had done nothing for her home country since she emigrated. She stays with Zaak, a cousin, who had been brought up with her by her mother and with whom she had contracted a false marriage (at her mother’s instigation) in order to get him into Canada. He has now returned to Mogadishu and the pair do not get on. She finds that the property is now occupied by a minor warlord but this does not deter Cambara, even though the role of women is now following a more fundamentalist model in Somalia. She gets involved with a women’s group and they, together with a couple of female Somalia friends back in Canada, try to make a difference, both as regards recovery of the property and helping the downtrodden in Somalia, mainly though certainly not only women. The idea that women are the only ones that can make a difference in that situation is attractive but the book overall seems somewhat unconvincing.