The latest addition to my website is Max Aub‘s Campo de los almendros [Field of the Almond Trees], the sixth, last and by far the longest in his Magic Labyrinth series about the Spanish Civil War. The war is almost over at the start of this book, with the Republicans barely holding on to Valencia and Alicante, and Franco about to enter Madrid. Much of the book is about the ensuing chaos as the Republicans endeavour to converge on Alicante, where they expect French and British ships to take them into exile. The French-Spanish border is now virtually blocked by the Francoists. More and more arrive and more and more wait as Aub superbly describes the chaos as well as the rumours. A British ship does come but refuses to take criminals and murderers. A French ship is rumoured to be arriving but is frightened off by the Francoists. In the end, most of the Republicans end up in the Field of Almond Trees of the title, a concentration camp. It is a sad story to the end of a war and Aub keeps the story going with, inevitably, the endless discussions by those waiting about the war, what went wrong and what will happen to them, as well as about any number of other topics. It is also a fitting end to the whole series, if not the greatest Spanish Civil War novel, certainly one of the the longest.

The latest addition to my website is Max Aub‘s Campo del Moro [The Moor’s Camp]. This novel, the fourth book in Aub’s Magic Labyrinth series on the Spanish Civil War to be published, though the fifth in the series, is set during Fall of Madrid, which will end the Spanish Civil War. It opens on 5 March 1939. We follow the stories of several characters, some real and some fictitious, most of whom have a colourful background or who have had a colourful war. However, the main focus is on the dispute between Prime Minister Juan Negrín who, together with the Communists, wants to carry on fighting till the bitter end, and Colonel Casado and the politician Julián Besteiro, who want to make a deal with Franco. They essentially carry out a coup d’état and Negrín, not wanting anti-fascists fighting anti-fascists, goes. However, the result is that the remaining republicans – socialists, communists and anarchists – spend their time fighting and, indeed, killing one another, while Franco waits for the city to surrender. He will only accept unconditional surrender. For Aub, the actions of Casado and Besteiro were betrayal and they do not come off well in this book. We are left with a sad and nasty end to a sad and nasty war. 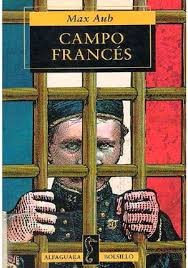 The latest addition to my website is Max Aub‘s Campo francés [French Camp]. This is the fourth in Max Aub’s six volume Civil War series, El laberinto mágico (The Magic Labyrinth), though it was the fifth to be published. This one is set primarily in France, starting with the period immediately after the end of the Spanish Civil War. It mainly involves Juan, a Spaniard who had not been involved in the Civil War but had lived in Paris, running a small shop that sold and repaired radios. He is arrested by the police in a round-up of Communists but released when he shows that he has been mistaken for his brother Juan, who was involved in the Civil War. However, once World War II breaks out, he is re-arrested and this time, despite his pleas and the pleas of his wife and even with Juan giving himself up, he is not released. He and the many other prisoners are moved to the Roland Garros stadium where they wait in vain for their case to be heard. When World War Ii breaks out, they are shunted down to the South of the country and things do not improve. Clearly Aub, who wrote this novel in 1942, well before it was finally published, felt very bitter about this and all of his ire is aimed at France and the French authorities. It is somewhat slighter than the previous three in the series but nevertheless an interesting view of an aspect of World War II most of us will be unaware of.