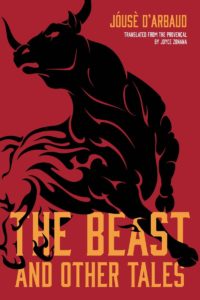 The latest addition to my website is Jóusè d’Arbaud (aka Joseph d’Arbaud)‘s La bèstio dóu Vacarés (The Beast and Other Tales). The title story is set in fifteenth century Provence and is about Jaume, a solitary gardian, i.e. cowboy/bull herder. While out riding he comes a strange creature and when he gets close to it, he finds that it has a human face, horns and cloven feet. He assumes it is the devil but neither the sign of the cross nor reciting an exorcism ritual has any effect. The creature can speak and assures him that it is not the devil. Jaume feels a mixture of fear and sympathy for the creature till it shows its extraordinary and fearful power, leaving Jaume affected for life by his experience – a fear, a friendship, a mystery and remorse, he says. Three other fine stories are also included in the book. Though the main story had appeared in a collection of French tales, it is wonderful to have this tale, a classic of European literature, properly translated and published English 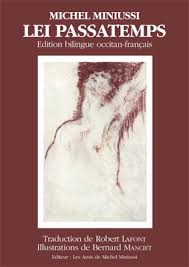 The latest addition to my website is Michel Miniussi‘s Lei Passatemps [The Pastimes]. Though born in Paris, Miniussi grew up in Cannes and became a very great supporter of Occitan literature. Sadly, he died at the age of thirty-six. This book, like some of his others, was published posthumously. It is an unusual book for an Occitan writer as it is simply a mocking though mildly affectionate portrait of the Cannes smart set, the rich and idle. They essentially do nothing, not even breed, except talk, travel and pass the time, as the title says. There is little sex, except for lascivious glances at effete young men, little discussion of the arts or politics and absolutely no sign of any remunerative or voluntary employment. They simply talk, go to parties, travel and wander aimlessly around. Though the book did appear in a French translation, it has been virtually ignored by French critics. It has not been translated into any other language.

The latest addition to my website is Jean Boudou‘s La Quimèra [The Chimaera], one of the classics of the Occitan novel. Jean Boudou, as he is known in French, is known as Joan Bodon in Occitan. He wrote all his books in Occitan. None has been translated into English. This book is a historical novel set in the late seventeenth/early eighteenth century, about the Camisards, Occitans who revolted against the French government over high taxes and religious freedom. The revolt was linked to the treatment of the Huguenots, though many Catholics took part. The story is told by a young Occitan man who is initially called Pierre (Peter) but later renamed Simon. At the start of the story, he is a slave in Algeria, and tells his story of how he got there. He had trained as a teaching assistant but after the death of his girlfriend, fled to a monastery where he became a commensal, i.e. someone who ate and worked with the monks but was not a monk. He gets to know the commendatory abbot, Antoine de Guiscard. and it is de Guiscard who helps foment the revolt. It all ends badly, with Simon captured off a ship when fleeing France when the revolt goes wrong, but we have followed his long and complex adventures, a story Boudou tells very well, albeit with a strong Occitan bias, showing how his people have been badly treated over the years by the French and the contribution of Occitan culture to European culture. 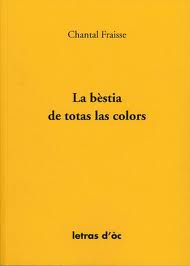 The latest addition to my website is Chantal Fraïsse‘s La bèstia de totas las colors [The Beast of All Colours], written in Occitan. This was prompted by my visit to Provence in May where I found bookshops, such as one called the Librairie de Provence, did not actually stock any books in Provençal/Occitan. On returning home, I poked around on the Internet to see if I could find any recent novels written in Provençal/Occitan and came up with this one, which had won the Paul-Froment prize for best work in Occitan in 2011. It is a simple but very enjoyable novel about the life of the financial director of Moissac Abbey, where Fraïsse works as a conservationist. She wrote it in Occitan which, she says, is her second mother tongue. Bertrand Cassanis really did exist and left behind a lot of documentation about his life and times, but Fraïsse has, by her own admission, used the bits she considered appropriate to write her novel, so the book is a novel and not a biography. This novel has not been translated into English or, indeed, into any other language and is unlikely to be so, unless Fraïsse herself translates it into French so, while I can recommend it, unless you read Occitan, you will have to wait for it to be translated.

I have recently returned frrm a week in Provence so this is a good time to say a few words about their literature. Provençal literature, which should be called Occitan literature, had its peak in the 12th and 13th centuries and influenced many poets, including Petrarch and Dante. Indeed, Petrarch spent much time in Provence and there is a museum devoted to him in Fontaine de Vaucluse, site of the largest underground spring in France. Not a great deal more happened till the founding of the Félibrige in the mid-nineteenth century. The Félibrige was an association of like-minded poets, whose best-known member was Frédéric Mistral, author of Mirèio , a long poem in Provençal, which helped him win the Nobel Prize for Literature, the only Provençal writer to do so.

Occitan literature does not have much of a reputation now. I have one author on my Occitan page though expect to read some authors, such as Joan Bodon (Jean Boudou), Bernat (Bernard) Manciet and Alem Surre-Garcia (link in French). However, I did expect to find other works while in Provence. A tour of the bookshops in Aix-en-Provence (i.e. in Provence) sadly revealed that, apart from the odd copy of Mirèio, the Provençal bookshops had as many books in Mongolian as in Provençal. Nor did they have any of the contemporary Provençal writers translated into French. When I asked for books in Provençal at the wittily named Librairie de Provence, they looked at me as though I was mad. We have books about Provence (i.e. travel, guidebooks, cooking) was the response. Sadly, the language and culture seem to be dying.

But we did go to Lourmarin, famous perhaps as the home of Peter Mayle (no, we didn’t see him) but also the place where two famous French writers are buried. The first is Albert Camus, who needs no introduction. He bought a place in Lourmarin with the money from his Nobel Prize and died in a car crash less than two years later. Provence, however, is also home to several famous writers who wrote in French but about Provence. They have yet to appear on my site but I have read all of them many years ago and plan to reread them. Marcel Pagnol is probably the best-known, not least because of the films of his book and the films he himself made. Jean Giono is less well-known, at least in the English-speaking world. A few of his books are available in English but, sadly, not too many.

Even less well-known is Henri Bosco, born in Avignon and buried in Lourmarin, not far from Camus. None of his works is in print in English, though some have been translated and, even in France, his reputation is fading, perhaps because he wrote about what he knew – Provence. I will mention, in passing, René Char from Isle sur la Sorgue, a pretty little town, now known for its antiques, and Samuel Beckett who is not from Provence but spent some time in Rousillon, a town famous for its ochre, during the war, hiding from the Germans.