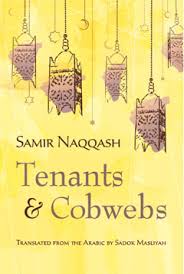 The latest addition to my website is Samir Naqqash‘s فراعراقية (Tenants and Cobwebs). Samir Naqqash was an Iraqi Jew whose family emigrated to Israel when conditions for Jews in Baghdad became very difficult in Iraq. He never really fit in while in Israel and, unlike, many Jewish émigrés, persisted in writing in Arabic rather than Hebrew, which meant he had less success than other Jewish writers in Israel. This book is set in a Baghdad neighbourhood in the 1940s, when the situation is getting bad for the Jews, following the Farhud (pogrom), as a result of Nazism, Zionism and Arab nationalism. We follow the stories of a host of colourful characters, Jewish and Arab, as they struggle with their own lives, all the while becoming increasingly aware that their stay in Iraq is drawing to a close after many hundreds of years and they will have to leave (By 2013, only five Jews remained in Baghdad, down from 50,000 in 1900). Naqqash tells a superb story of their own problems and disputes, against the background of rising tensions and the gradual realisation that they will have to leave Baghdad.