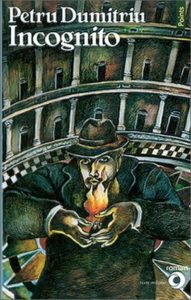 The latest addition to my website is Petru Dumitriu‘s Incognito (Incognito). It is set in the period after World War II but before Ceaușescu took power. Our hero is a Romanian government official who had had trouble with the authorities but has now been rehabilitated. He wants to go abroad with his wife, officially just for a trip but, as we know, to defect. When he is given the task of investigating a high-ranking official, Sebastian Ionesco, who had fallen out of favour, he has to carry it out. Sebastian gives him a large notebook, which is a sort of confession, which we read, which tells his story, involving his two brothers, both now high-ranking officials, his wartime career, his job in the security services and his resignation and gradual change to acting according to his conscience instead of party diktat, which results in dire consequences. Dumitriu himself managed to get out and wrote this book while in France but others had to make compromises or pay the cost, as Sebastian had to.