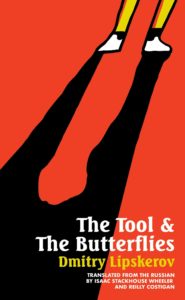 The latest addition to my website is Dmitri Lipskerov‘s О нём и о бабочках (The Tool and the Butterflies). This is a complex story, focusing on one Arseny Iratov who, at the beginning of the novel, is rich (money made from Soviet-era illegal currency speculation, and later dealing in precious stones and an architectural business he owns) with a much younger, loving girlfriend, Vera. One day he wakes up to find his genitals have disappeared (the tool of the title). Soon other men are in the same situation. Meanwhile we are following a series of people, mainly male, who seem to be connected to him (one is his grandson) who seem to be different, on the face of it ordinary people, but with strange powers and knowledge, particularly detailed knowledge of Arseny and his life and, in the case of the grandson, superior intelligence. While telling his complicated tale, Lipskerov is wittily satirising contemporary Russia – corruption, drunkenness and the like. It is a very clever and original book and well worth reading.