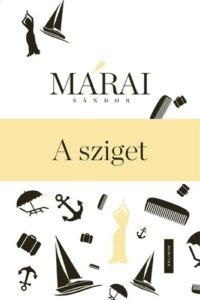 The latest addition to my website is Sándor Márai‘s A sziget [The Island]. This novel, available in seven other languages but not English, tells the story of Viktor Henrik Askenazi, a Frenchman of Hungarian origin, who is a professor of Greek and Asia Minor languages in Paris, married to Anna, with a daughter and also with a mistress, Elise. He leaves Anna to live with Elise. He struggles with his relationships and eventually leaves Elise to live on his own, though still seeing Anna. At the suggestion of friends, he goes off on holiday to what is now Croatia, staying on an island, not far from Dubrovnik. Initially he does nothing but when he learns that Anna has gone off to Brazil, following a letter from him asking for a divorce, and he sees and follows an attractive German woman in the hotel, he slowly becomes agitated and slips into insanity. This is the story of a man who needs structure in his life and when that goes, he goes as well.