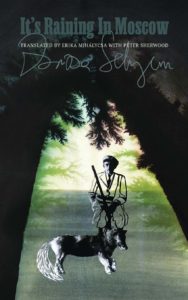 The latest addition to my website is Zsuzsa Selyem‘s Moszkvában esik (It’s Raining in Moscow). This is a series of interrelated stories concerning the Beczásy family, who were driven out of Armenia and settled in what was then Hungary, but in the last century changed hands three times and is now in Romania. Aided by various animals, who comment on both events and human foibles, we follow in particular the story of István Beczásy from his sexual initiation as a young man to the age of ninety-seven when he dictates his memories to his granddaughter. In particular, he and his family are driven out as enemies of people and settled in remote Romania. He is arrested and tortured but survives. Selyem does not hold back her hatred of the communist regimes and clearly has a strong affection for István, despite his faults, a man who loves plants and the land.