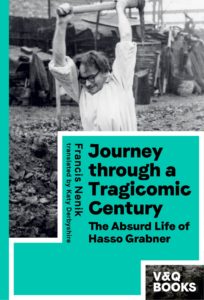 The latest addition to my website is Francis Nenik‘s Reise durch ein tragikomisches Jahrhundert (Journey Through a Tragicomic Century). The book is a narrative non-fiction. It is the biography of a forgotten German writer, Hasso Grabner (link in German) who had something of a colourful life. He never knew his father, became a Communist early in his life, opposed the Nazis in the 1930s but ended up in Buchenwald and then as part of a punishment battalion in Greece, where he tried to sabotage the German war effort. After the war, he was in East Germany, working to build socialism but, because he was less than ideologically pure but very efficient, he was at one minute an ordinary worker and the next head of a major industrial combine. Eventually, he became a writer but, even then, clashed with the authorities. Nenik tells the story at a furious pace but makes plenty of comments and writes Grabner’s story as a novel not as a formal biography , which makes it highly readable and enjoyable. This is a book from new imprint V&Q Books, , headed by Katy Derbyshire, translator of this and many other fine German works.