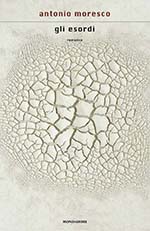 The latest addition to my website is Antonio Moresco‘s Gli Esordi [The Beginnings]. One of my favourite blogs was The Untranslated which sadly retired (though the old posts are still accessible and Andrei continues to tweet as @TheUntranslated). Andrei reviewed a number of fascinating books which, as the title of his blog suggests, have not been translated, at least into English. However, quite a few, though certainly not all, were written in or are available in languages I can read so I shall be giving some of them a go over the next few months.

This one has made it into German but not any other language. It is a long novel, divided into three parts with a reticent narrator who, like Moresco himself, is first a novice priest, then coordinator for a left-wing group and, finally, a would-be novelist. The whole novel is absurdist as our hero takes a vow of total silence in the first part and simply observes, finds the region of Italy where he is active to be almost deserted in the second part, apart from a few decidedly odd characters, and struggles to get his novel published by his former monastery prefect in the third part and ends up partying with Pushkin, Cervantes and Emily Dickinson. It is totally absurd, funny and serious and highly original. No surprise that it is not available in English.