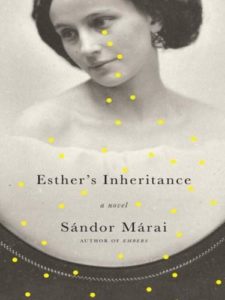 The latest addition to my website is Sándor Márai‘s Eszter hagyatéka (Esther’s Inheritance). Esther is in her late forties and lives alone with an elderly aunt. She has only ever loved one person – Lajos. After a long gap he is now visiting her and, as the second sentence of the book tells us, will rob her. He had been the friend of her brother, Laci, and was going to marry Esther but ended up marrying her younger sister, Vilma, with whom Esther did not have a good relationship. Vilma died and Esther briefly looked after her two children while Lajos travelled. When he returned, she cut off contact. But now he is back, smooth, deceitful, dishonest, deceiving Esther, her brother, her friends and everyone else he comes into contact with. People know he is deceiving them and yet they go along with it.