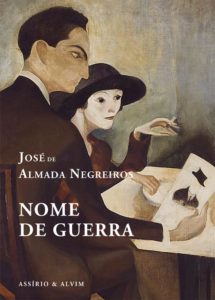 The latest addition to my website is José de Almada Negreiros‘ Nome de Guerra [Nom de Guerre]. This is a Bildungsroman but also a mocking of the conventional romantic novel. Antunes, a thirty year old man from the provinces, is sent to Lisbon by his uncle in order to make a man of him. He is handed over to D. Jorge, a man who is both stupid and vulgar. He takes Antunes to a club where they get drunk but where they meet a young prostitute, Judith. Antunes falls for Judith, though both his gentlemanly upbringing and his nice girlfriend, Maria, back home, do give him some pause but, ultimately, he wants to experience the pleasures of a sexual adventure. He analyses his motives to death but it is clear (both to us and to him) what they are. Negreiros has his fun and, indeed, so does Antunes, realising that Judith is just an experience to go through and then move on. And Judith? Well, she knows that true love is not for her.