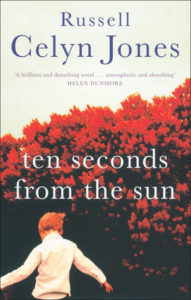 The latest addition to my website is Russell Celyn Jone‘ Ten Seconds From The Sun. The novel is narrated by Ray Greenland a river boat pilot, happily married to Lily with two children. However, Ray Greenland is really Mark Swain, who was convicted of a brutal murder when he was twelve. He served his time, received pilot training, did his probation and became a free man. However, before he married, had children and travelled abroad, he was obliged to notify the authorities. He did not. He now leads a happy life, only slightly worried that he will be identified – people often think they know him but not from where. He has a cover story, based on his probation officer’s life but when people question him about his childhood, he suddenly has to invent details or claim forgetfulness. The real worry is if someone from his past reappears and, inevitably, that is what happens. What makes this book interesting is that we see his story entirely from his perspective rather than from the perspective of his new or past family. He is somewhat remorseful but more concerned about his future than his past and he has a violent streak but just about manages to control it but when his past comes back and threatens to destroy his idyll, things take a different turn.