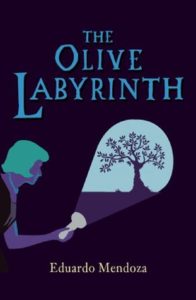 The latest addition to my site is Eduardo Mendoza‘s El laberinto de las aceitunas (Olive Labyrinth). This is a follow-up to his El misterio de la cripta embrujada (Mystery of the Enchanted Crypt), once again featuring a detective called GoneWithTheWind, who is, in fact, confined to a mental hospital. Once again, he is removed from the hospital by Police Inspector Flores, this time by force, with a view to acting as bagman in handing over the ransom money to a gang who have apparently kidnapped a senior official. Inevitably, he is caught up in a complicated plot, with all sorts of wicked deeds and, inevitably, it all goes terribly wrong for him, even though he once again finds an attractive young woman to aid him. It is very funny, with Mendoza mocking Spanish officialdom and the plot is very tortuous