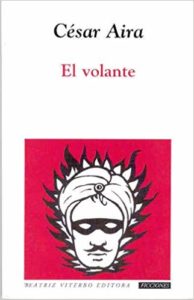 The latest addition to my website is César Aira‘s El volante [The Flyer]. This is another novel from Aira which starts in a fairly straightforward manner and then veers off, concluding with something of an apocalyptic ending.

Norma Traversini is a teacher of dramatic arts, who is writing a flyer to be distributed around the neighbourhood (in Buenos Aires) offering her services to teach her neighbours how to be more sincere in their daily dealings with lovers, bosses and children. Unfortunately, she gets carried away in explanations and, even when she starts again, does not seem to be able to do anything but waffle. She then changes tack and starts summarising a novel she has recently read, the name of whose main character, Lady Barbie Windson (sic) is the name she has chosen for her studio. Lady Barbie is being educated in Kent while her parents are in India. When her mother suddenly dies, she, aged twenty, is summoned to India to be her father’s hostess. She gets caught up in a wild adventure, involving Catholic vs Protestants battles, kidnappings, crocodiles, polo ponys, Indian mystics, teleportation, silk worms, the ruined city of Kali, resurrection from the dead and a strange character called The Mask. It is all great fun but does not help Norma with her flyer.