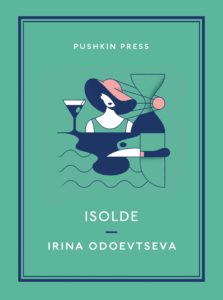 The latest addition to my website is Irina Odoevtseva:‘s Изольда (Isolde). This book was first published in 1929 and was condemned by Odoevtseva’s fellow Russian émigré writers, including Nabokov, as it dealt with teenage sex and nihilism and was therefore clearly immoral. It tells the story of a Russian émigré family in Biarritz in the 1920s. They are irresponsible mother Natasha, more concerned with her love life than her children (her husband was killed in the Revolution) and her two teenage children, Liza and Nikolai. Liza meets a young Englishman, Cromwell, who christens her Isolde before he knows her name and falls in love with her. When they are joined by Liza’s nominal boyfriend, Andrei, and Natasha disappears in pursuit of her boyfriend, things get very much out of hand. It was published the same year as Jean Cocteau‘s Les Enfants terribles (Children of the Game (UK); The Holy Terrors (US); Les enfants terribles), to which it bears some resemblance.