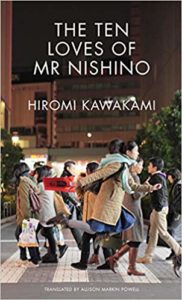 The latest addition to my website is Hiromi Kawakami‘s ニシノユキヒコの恋と冒険 (UK: The Ten Loves of Mr Nishino; US: The Ten Loves of Nishino). This is another clever novel from Kawakami about the complexity of love and relationships. Yukihiko Nishino has affairs with ten women in this book (though probably a lot more in actuality). Each one is slightly different but each has a few similarities. Firstly, the relationship does not last. For various reasons, usually because he finds someone else, he moves on, though sometimes not moving on till he is well into the relationship with the next woman. Secondly, he does seem devoted to each woman, proposing to several of them (they do not take his proposal seriously), even while, as we know and, in some cases, they know, there is another woman in the offing. Thirdly, even if their relationship is very brief, they do not forget him. He seems to have a profound effect on them, as is seen at his funeral. (We know, early on, that he is to die, as he appears as a ghost to one of his lovers.) Kawakami tells her tale her well, with each relationship different, despite the similarities, and each time we and the women ask, will this one last?