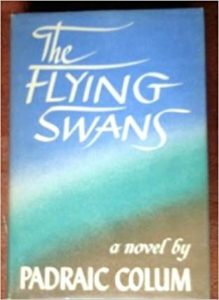 The latest addition to my website is Padraic Colum‘s The Flying Swans. Colum is better-known as a poet, playwright and recounter of Irish folk tales so this book – one of the two adult novels – he wrote – is relatively unknown, which is a pity, as it is a very fine story. It tells of the O’Rehill family, formerly Irish gentry but pushed out somewhat by their English colonial masters, but now – late nineteenth century – trying to get back. We follow, in particular, two members, father and son Robert and Ulick. Both father and son seem adrift, unsure of where they are going and what to do. Robert manages to alienate several of his family. He twice abandons his wife and children and shows a general lack of responsibility. Ulick struggles to help his abandoned mother and bring up his younger brother but he, too, cannot find his place and loses his way more than once. Colum tells a superb story, augmented with a large cast of colourful Irish characters.