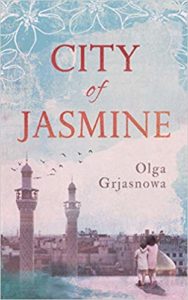 The latest addition to my website is Olga Grjasnowa‘s Gott ist nicht schüchtern (City of Jasmine). Grjasnowa is an Azerbaijan-born German national, married to a Syrian. This novel primarily takes place during the recent Syrian Civil War. We follow the fate of three Syrians caught up in it. Hammoudi has studied medicine in Paris and briefly returned to Syria to visit his family and renew his passport. However, though his passport is renewed, he is not allowed to leave the country. Amal is the daughter of a rich man, who is studying drama. She is also demonstrating against the repression by the Assad Regime. She meets Youssef, a young director. Amal and Youssef both get arrested and later leave the country, though their troubles are far from over. Hammoudi works as a doctor in his home town of Deir ez-Zor, while under heavy attack from both the Syrian army and Isis, before escaping to Turkey and also having further problems as a refugee. It is a thoroughly grim novel but interesting to see the crisis from the perspective of the ordinary Syrian trying to survive.