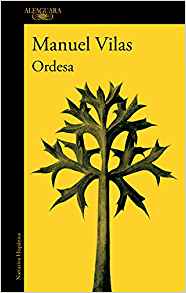 The latest addition to my website is Manuel Vilas‘ Ordesa. This book has had considerable success in Spain, both commercially and critically. It is essentially autobiographical, a tale recounted by Vilas after his divorce, in which he examines the lives of his parents, of himself and of his sons and links the events and circumstances of their lives to what is going on in Spain. It is uniformly gloomy and pessimistic, though not without some humour and a very strong affection for his late parents. Spain, however, does not fare well in this book, which will join the increasing number of books published in Spain about how dismal the country is, particularly since the 2008 financial crisis. Vilas does not hold back either on his criticism of Spain and of himself (alcoholic, divorced because of infidelities, guilt about loss of parents). Self-flagellation may be more a Spanish thing than the UK/US thing so it will be interesting to see how well the book does in English (to be published by Canongate in the UK (in April 2020) and Riverhead in the US).