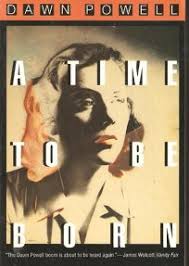 The latest addition to my website is Dawn Powell‘s A Time to Be Born. This is was Powell’s first commercially successful novel and it is easy to see why, as it is a wicked satire on New York society when war was raging in Europe but before the US had entered the war. There are two heroines, both from Lakeville, Ohio. Amanda Keeler has come to New York to promote her novel and has managed to snare successful publisher and newspaper owner, Julian Evans and has used her marriage to him to promote her novel and by writing articles, though as we soon find out, her role both in writing her articles and second novel is limited. She soon denies Julian sex and has a relationship with her former boyfriend and then a Hemingway-like journalist and novelist. Also from Lakeville is the more naive Vicky Haven, Amanda’s protégée, who gets caught up in Amanda’s plotting while trying to make a life of her own after failing in Lakeville. Powell satirises virtually everybody in this book – high and low – which makes it great fun to read