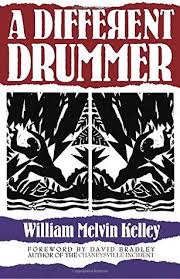 It was interesting to see in Today’s Observer, an article on William Melvin Kelley and, moreover, claiming his A Different Drummer is a lost literary masterpiece. The book has been on my site since the beginning and I read him many years ago. More interesting is his book Dunford’s Travels Everywheres (yes, it is everywheres in the plural). I notice that a well-known online bookseller has it for sale for $168.50 and more (up to $892.98) in the US and £205.49 and £1,419.46 (plus £3 delivery instead of the normal £2.89) in the UK. Anyone wanting a copy for a mere £1000? I have one available.

As Sarah Hughes says in her article, Kelley struggled to gain recognition and always felt that racism played a part in his lack of literary success. Both books are deserving of greater acclaim. According to this article, he is also credited with first using the term woke (in its modern sense of awareness of issues concerning social justice and racial justice). It is to be hoped that this republication will bring him the acclaim he did not obtain in his lifetime (he died last year – 2017). I can highly recommend both novels but I am not convinced that they were lost.