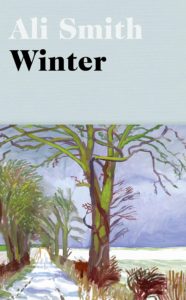 The latest addition to my website is Ali Smith‘s Winter. This is the second novel in her seasonal tetralogy. It tells the story of a dysfunctional family. The oldest sister, Iris, has strong left-wing views and is thrown out of the house by her father. Sophia, her younger sister, behaves and is responsible and goes on to become a successful businesswoman. She has a son, Arthur (Art) from a casual affair. Neither sister married and both are now old and not speaking to one another. Having broken off with his girlfriend, Charlotte, Arthur now turns up for Christmas at his mother’s huge house in Cornwall (where she lives alone) accompanied by a substitute, hired Charlotte, in the form of Lux. Iris is summoned as Sophia seem to be not eating and is accompanied by a strange, disembodied head and the four spend Christmas together where the past is aired, relationships discussed and challenged and topics such as Brexit, refugees, environmental politics and Greenham Common the subject of conversation. Smith makes her point about her issues but also about working together for the common good, something she feels that we do not do well either as a country or individuals.