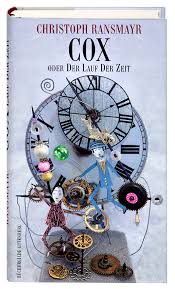 The latest addition to my website is Christoph Ransmayr‘s Cox oder Der Lauf der Zeit [Cox or the Course of Time]. The hero of this book is Alister Cox, based on the very real James Cox. Unlike James Cox, Alister Cox travels to China to build clocks for the Chinese Emperor Qianlong. Qianlong is not particularly interested in the clocks and automata that they bring with them but wants a clock that can tell variable time – the time of a child or a lover or a man condemned to death. They work on those clocks and make some progress but the Emperor still seems less than impressed. Then the Emperor says he wants an eternal clock – a clock that works eternally. Cox feels he cam make such a clock but he is warned by Joseph Kiang, his interpreter, that to do so would be to challenge the Emperor, who has sole control of time, and to challenge the Emperor can only end one way – badly. I found this book less interesting than Ransmayr’s other work as it did not seem to really take off but was almost mundane, despite its exotic location and fascinating theme. It has been translated into four other languages but not English.