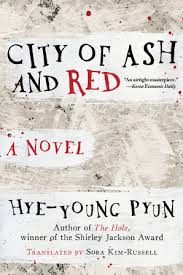 The latest addition to my website is Hye Young-Pyun‘s 재와 빨강 (City of Ash and Red). This a grim Kafkaesque story about an unnamed man from an unnamed country, who works for a pesticide company. He is sent to the head office of the company, which is located in another country, where he barely speaks the language. On arrival, there is an epidemic and he is held at the airport for checks. He then goes to the flat the company has given him but it is in area where there are huge piles of rubbish because of a strike, and looting is taking place. His case is stolen at the building, which is then put into lock down because of the epidemic. He learns from a friend (actually his ex-wife’s second and now ex-husband) that the police are after him. When they come looking for him, he escapes through the window and is left to fend for himself among the piles of rubbish, other down-and-outs and lots and lots of rats. Hye Young-Pyun lays it on, as our hero, plunges further into a nightmare.