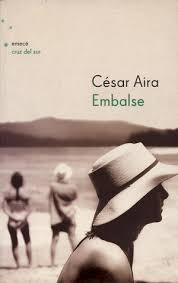 The latest addition to my website is César Aira‘s Embalse [Reservoir]. This is another first-class novel by Aira, telling about a couple from Buenos Aires holidaying in a remote Argentinian town by a lake with their young children. Martín, the husband, keeps finding strange things on his walks – large houses just near his he had never seen before, paths he had never seen before, strange perspectives and nature in its glory but also its mystery. He does not take to the locals, whom he finds peculiar nor does he take to the gay/transvestite community. However, his walks and investigations reveal strange goings-on, probably associated with the Fish Breeding Centre, with chickens that can swim, strange glows and an influx of major Argentinian footballers into the town. Poking around where he perhaps should not reveals much more. Sadly, this novel has not been translated into English, whcih is a pity, as it is a very fine work.