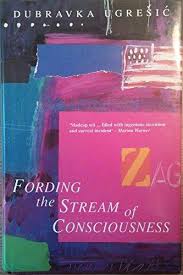 The latest addition to my website is Dubravka Ugrešić‘s Forsiranje romana-reke (Fording the Stream of Consciousness). This is a wonderful, witty satire on literary conferences. The setting is a literary conference in Zagreb, while Yugoslavia was still a country, and Ugrešić manages to mock numerous nationalities and their foibles, but, not surprisingly, with a special level of mockery for the Russians and, indeed, her own compatriots. Conspiracies galore, lots of sex (and sexual positions), including an aborted rape by three women of a sexist critic, lists, in-jokes and other post-modernist tropes, not to mention sciatica, are features of this hilarious book.