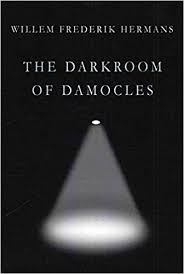 The latest addition to my website is Willem Frederik Hermans‘ De donkere kamer van Damokles (The Darkroom of Damocles). This is the story of Henri Osewoudt. When aged twelve, his mother murders his father (we do not know why) and he goes to live with his uncle and aunt and shares a bed with his nineteen year old cousin Ria. Some years later, just before World War II, his mother is released so Henri marries Ria (to her parents’ disgust) and moves back to his parents’ tobacco shop with Ria and his mother. He is visited by a shady man, Dorbeck, seemingly from the Dutch Resistance, and is unwittingly dragged into the Resistance, killing people and getting involved in various dubious activities. He is captured and escapes (twice). When the war ends he is arrested for having betrayed numerous Dutch resistance fighters, saying Dorbeck can vouch for his innocence. But Dorbeck is not to be found and no-one has heard of him.