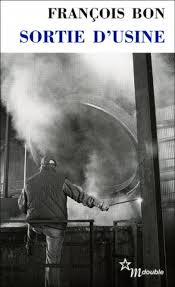 The latest addition to my website is François Bon‘s Sortie d’usine [Factory Exit]. This is Bon’s first novel but, sadly, neither this novel nor any of his others have been translated into English. It is a stream of consciousness novel, told in the third person, about life in a factory. The unnamed protagonist who, like Bon himself did, works in a metallurgical factory and he looks at it as though with a camera, moving around the factory, seeing the processes, the people, the surroundings, critical and cynical at times, affectionate towards certain employees (though generally not towards the management) and showing the lack of health and safety concerns (many of the employees are deaf because of the noise and we see a couple of serious injuries), the dehumanising aspect of such work and the tiredness and boredom of the working day. Bon never lets up, with his camera moving around, now to a well-liked employee, now to a strike and the HR manager speaking to the staff, now to the grime and grimness. It is not pretty and not happy but very well done.