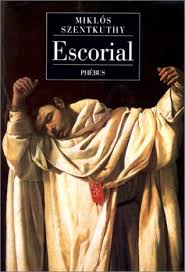 The latest addition to my website is Miklós Szentkuthy‘s Eszkoriál [Escorial]. This book follows the life of Francis Borgia, descendant of those Borgias, later Director-General of the Society of Jesus and canonised nearly a hundred years after his death. He had a colourful life and Szentkuthy inevitably makes it more colourful, while being critical of Spain of that era (sixteenth century). Though the novel is primarily set in Spain, we spend a fair amount of time in legendary China, meet Francis’ great-aunt Lucrezia Borgia and the Holy Roman Emperor, Charles V, among other notables, and follow the contemporary political situation. As always, Szentkuthy charges off on tangents, plays havoc with historical accuracy and chronology and has great fun condemning Catholic Spain.