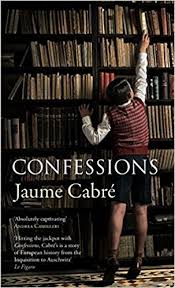 The latest addition to my website is Jaume Cabré‘s Jo confesso (Confessions). This is the final book in my 2018 Catalan marathon. It is also the longest (around 1000 pages) and probably the best. It tells the story of a father and son, Felix and Adrià Ardèval, both obsessed with collecting rare manuscripts and other items, a rare and very valuable 18th century violin, whose owners all too often die a violent death, and the nature of evil, illustrated by the Holocaust (specifically two of the doctors working at Auschwitz) and, to a lesser extent, the Spanish Inquisition. We follow how Felix moved from being a possible priest to to becoming a ruthless and morally challenged collector and how his son tried to avoid being his father but did not entirely succeed. We also follow numerous stories, both set in the present and past, which examine the nature of evil and the moral flaws we all have. It is a superbly written book, unfinished according to the author.