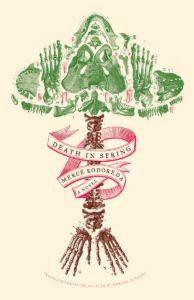 The latest addition to my website is Mercè Rodoreda‘s La mort i la primavera (Death in Spring). Though Rodoreda wrote this book at around the same time as she wrote La plaça del Diamant (UK: The Pigeon Girl; US: The Time of the Doves), it was not published till after her death. It is now considered one of her best works. It tells of a remote village with strange customs, rituals and behaviours and threats both from Nature and a shadowy group of people called the Caramens. The villagers have to die (essentially, be killed) in a strange and unpleasant ritual and generally have to follow other rituals and customs which seem to us cruel and/or bizarre. Our fourteen-year old hero is a victim of these rituals. Rodoreda clearly put a lot into this work as it is thoroughly original and, at least in part, is intended to condemn totalitarianism.