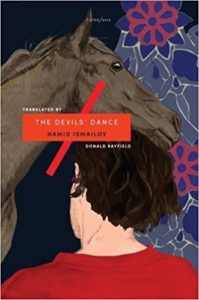 The latest addition to my website is Hamid Ismailov‘s Jinlar Bazmi (The Devil’s Dance). It tells the story of the last nine months of the life of Uzbek writer Abdulla Qodiriy, spent in a Stalinist prison in 1937-38, prior to his execution as a bourgeois nationalist. Just prior to his arrest, Qodiriy had planned to write a novel set in mid-nineteenth century Bukhara and Kokand, about Nasrullah Khan, Emir of Bukhara and Madali Khan, Khan of Kokand, both distinctly unpleasant men, and the unfortunate Oyxon, who was married to both of them as well as Madali’s father, all against her will. We follow Qodiriy’s time in prison, while he writes the book in his head, changing the emphasis a lot, in the light of his discussions on the history of the period with his fellow prisoners, particularly as regards the Great Game. Ismailov superbly shows his creative process and how Qodiriy’s plight overlaps with that of Oyxon and other victims of that time, as well as telling us about nineteenth century Bukhara and Stalinist prisons.