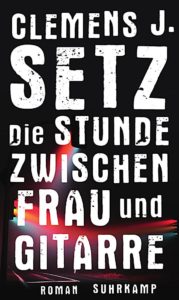 The latest addition to my website is Clemens J. Setz‘s Die Stunde zwischen Frau und Gitarre [The Hour Between Woman and Guitar]. This is a monumental novel – 1021 pages – so unlikely to appear in English, though it has been translated into French. It is set in a care home and involves a young care assistant, Natalie Reinegger, who has to look after a man in wheel chair, Alexander Dorm, who had been a stalker and had driven a woman he stalked to commit suicide. To Natalie’s surprise, his only visitor is Christopher Hollberg, the widower of the woman who committed suicide. On the surface, the two men seem to get on well but gradually Natalie is dragged into their relationship which is not as straightforward as it seems. At the same time we are following Natalie’s own life – her casual affairs, her friends, her IPhone, her imaginary mouse and her real cat as well as the stories of the other care assistants and other patients. The book is way too long but Setz keeps on going and keeps the reader’s attention, despite no major plot revelations.