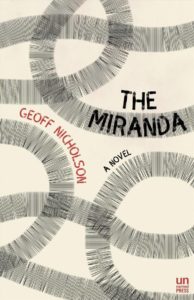 The latest addition to my website is Geoff Nicholson‘s The Miranda. I have read all of Nicholson’s novels but this one is somewhat different from the others, less quirky, less funny, less English and much darker. Joe Johnson, our narrator, is a retired torturer. He is engaged by a shadowy, presumably US government organisation (the novel is set entirely in the US) to torture those people that are going to serve abroad and risk being captured and tortured, in order to desensitise them. He has now retired, his marriage ended, and moves to a rural area where he plans to walk 25,000 miles around his garden, the equivalent of walking the circumference of the Earth. However, one of his torture victims has gone rogue, he has nasty and violent neighbours behind him and a woman artist wants to make him an art work. However, he also has Miranda, a woman who does his shopping for him and uses him as a guinea pig to create the next great cocktail, to be called The Miranda. All of this and more comes together in a quasi-apocalyptic, Nicholsonian finale. It is a clever story with several twists but very dark, with too much torture and brutality for my taste.

2 Replies to “Geoff Nicholson: The Miranda”