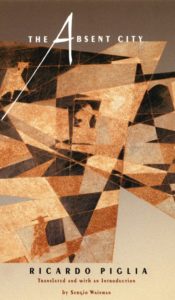 The latest addition to my website is Ricardo Piglia‘s La ciudad ausente (The Absent City). This is a complex novel – a detective story, a political novel, a Joycean extravaganza, a Bildungsroman and a city novel, set during Argentina’s dirty war but concerned not only with the struggle against the brutal government but with two authors – James Joyce (whose Finnegans Wake acts as a sacred text for those fleeing the government repression) and the far less well-known (in the English-speaking world) Macedonio Fernández who has created a complex machine based in part on a Poe story and in part on the brain of his late wife, Elena. Junior, a journalist, is tracking down the machine and the Engineer, who may well have been the programmer of the machine, and gets in involved with various unsavory characters as well as those fleeing the government repression. It is a highly intelligent and original novel though, sadly, does not seem to have had the success outside Argentina that it had there.