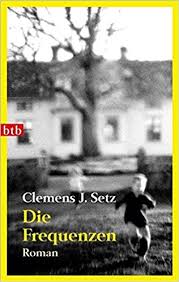 The latest addition to my website is Clemens J. Setz‘s Die Frequenzen [Frequencies], Setz, from Graz in Austria, wrote this huge novel (over 700 pages) when he was twenty-seven and has produced a monster of novel. It is haphazard and chaotic and that can be annoying but is also part of its charm, as it illustrates the chaotic lives of the characters. The main two are Walter Zmal and Alex Kerfuchs. Walter is the son of a successful architect. His father is always helping get him a position – assistant film director, journalist and so on, and Walter fails at all of them, as he more or less fails in his relationships, both homosexual and heterosexual. Alex’s father walked out on him and his mother when he was younger and this has had an effect on him. He now works in an old people’s home and has a variety of relationships, including one of the nurses and a much older therapist, who acts as a focal point for several of the characters. The paths of Walter and Alex cross and uncross throughout the book. From Gabi, who has tinnitus (the frequencies of the title) to Alex’s strange landlord Wilhelm Steiner, from Walter’s and Alex’s various peculiar lovers to Uljana, the dog who spends the book wandering the streets of Graz, we meet a host of characters who, frankly, are not quite in tune with the world. It is an ambitious and impressive novel, even if in need of some editing, but sadly not available in English. 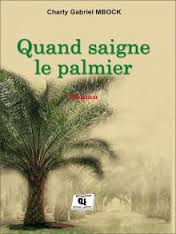 The latest addition to my website is Charly Mbock‘s Quand saigne le palmier [When the Palm Tree Bleeds]. Mbock, a Cameroonian academic and administrator, has also written three novels, of which this is the first. It tells of an African village, in the past, where the chief is impotent and therefore cannot produce an heir, a terrible misfortune. Despite help from a friend, first by finding a healer who will cure his impotence and then, when his impotence is cured but he remains infertile, standing in for him, things go drastically wrong, as the heir does not look like the chief but the friend. The chief is an absolute chief and he abuses his position of power to take revenge on those who mocked him, his wife who he feels betrayed him and the friend who helped him. It is a sad tale of abuse of power and loss of power. 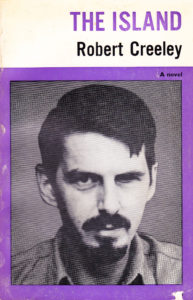 The latest addition to my website is Robert Creeley‘s The Island. This is an autobiographical novel by Creeley – his first – about the breakdown of his marriage to Ann McKinnon (his first of three marriages). John, the Creeley character, and his wife, Joan, are living on an unnamed Spanish island (but clearly Majorca where the couple lived with their three children). Joan is trying to bring up the children while John spends his time drinking with Artie, a permanently impoverished, often loud-mouthed English poet (based on Martin Seymour-Smith). We gradually watch the marriage fall apart, as John makes only feeble efforts to behave better and Joan becomes more and more distant from him. Meanwhile, other writers turn up and help John with his drinking. It is a fine portrait of a failing marriage, though Creeley would continue to be known for his poetry rather than his prose. 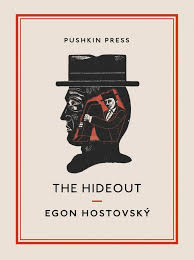 The latest addition to my website is Egon Hostovský‘s Úkryt (The Hideout). The novel was first published in 1943 but has just been reissued by Pushkin Press. It tells the story of an unnamed narrator, a Czech engineer who has invented a revolutionary anti-aircraft gun sight. However, the Munich Agreement has happened. As he does not want it to get into the hands of the Germans, the Czechs have no use for it and he is not prepared to give it to the British or the French, as they betrayed his country, he destroys the blueprint, to his boss’s consternation. He then flees the country. Much of what he does, we learn from a letter he is writing to his wife, Hanichka, as he is hiding out in Normandy, under German occupation, in the house of a French friend, and about to embark on what seems to be a suicidal mission. As he lives in the basement in permanent darkness, he isn’t happy and fantasises but also gives his wife a limited account, before we get a more detailed account of what happened to him and why. Hostovský tells an excellent story of man caught up in a grim predicament, partially of his own making but mainly because he is caught up in the war.