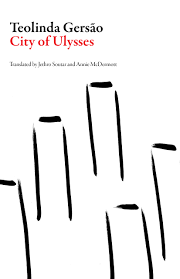 The latest addition to my website is Teolinda Gersâo‘s A cidade de Ulisses (City of Ulysses). Unusually for Gersâo, this novel is narrated by a man, Paulo Vaz, an artist. Vaz has been asked to contribute to an exhibition on Portugal and, in particular, focus on his view of Lisbon. He is reluctant to accept because he has already worked on such a project, with Cecilia, his now ex-girlfriend and one, apparently, whom he is no longer in touch with. We follow his back story, in particular his relationship with his parents (cruel military father and mother who taught him painting) and, of course, his relationship with Cecilia. We learn how the couple discovered Lisbon and discovered it both as the City of Ulysses but also as the unknown city, both unknown to the world at large but also, in parts, unknown to its own inhabitants. We also learn how and why the relationship ended, how both were changed by it and how Vaz is going to put forward their joint view but also their individual views of Lisbon, the city of Ulysses. It is not your typical Gersâo novel but still a very fine one.