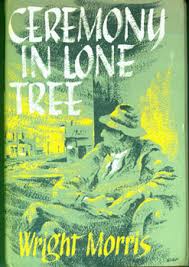 The latest addition to my website is Wright Morris‘ Ceremony in Lone Tree. This is a follow-up to his The Field of Vision, but, in my opinion, a much better book. It features much of he same cast but with a few extra, who will, in the second part of the book, attend the eponymous ceremony, namely Tom Scanlon’s ninetieth birthday party, in the now almost deserted town of Lone Star. Scanlon spends most of the book asleep but his two daughters, Lois and Maxine, and their husbands and children feature, as does Gordon Boyd, friend of Walter McKee (husband of Lois). Boyd travels around, finding the A-bomb tests and a young woman he calls Daughter before arriving, almost inadvertently, in Lone Star. The others come from nearby but still carry as much emotional and mental baggage as Boyd, not least Lee Roy, nephew of Bud, Maxine’s husband. He is one of two murderers in this book – the other managed to kill ten, but Lee Roy only two. The ceremony itself is chaotic – a madhouse as Maxine describes it – but takes its course. It is an excellent novel, showing Morris as an excellent portrayer of the foibles and problems of the people of Nebraska.