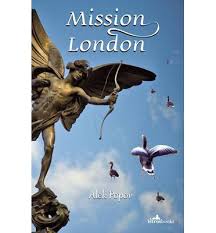 The latest addition to my website is Alek Popov‘s Мисия Лондон (Mission to London). Alek Popov was the cultural attaché to the Bulgarian Embassy in London and this is a very funny novel, satirising the Embassy and its relations with the British. The main focus of the story is a charity event, hosted by the wife of a prominent Bulgarian politician, Devorina Pezantova, at which it is hoped that the Queen (the British one, not the Bulgarian one) will be present. The new ambassador has got his job because of the influence of Mrs Pezantova, so everything has to be perfect. Unfortunately for him, most of the staff seem to be corrupt, incompetent or both. Indeed, he calls them all idiots. Allegedly cannibalistic ducks, a large amount of bedpans, Princess Diana and Stephen Hawking pornography, a massive flaming modern art work that goes wrong and, of course, the Queen and the Russian Mafia all feature in this very witty satire. Far from alienating the Bulgarians (except, perhaps, for the diplomatic community), the book was a huge best-seller in Bulgaria and made into a successful film.