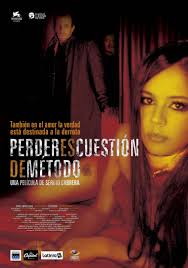 The latest addition to my website is Santiago Gamboa‘s Perder es cuestión de método [Losing is a Question of Method]. This is a detective novel, set in Bogota. Our hero is Victor Silanpa, a journalist. He learns of a body being found outside of Bogotá. The victim has been impaled. The police seem to be incompetent and it is Silanpa, aided by the brother of the possible victim, who investigates, uncovering a plot involving a complicated land deal, which certain powerful people stand to make a lot of money out of. Silanpa becomes totally obsessed with the case, neglecting his job, his girlfriend and, indeed, his whole life, to uncover the truth. He runs around Bogotá, pursued by thugs, caught up in a car chase wearing only a towel, drinking heavily, hiding out wherever he can, while the police seem indifferent. While many of the standard detective novel clichés are there, it is not a bad novel, as we follow Silanpa’s obsession, even as his life seems to be falling apart. The book has been translated into nine languages, including Basque and Czech, but not English.