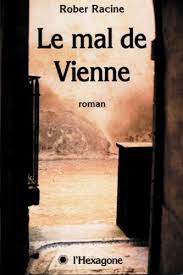 The latest addition to my website is Rober Racine‘s Le Mal de Vienne [The Vienna Sickness]. The author of this novel, Rober Racine, is primarily known as a visual artist. He is also a composer and dramatist but has written five novels. This work is an entirely absurdist and anarchic novel, written by a man for whom images and sounds are clearly more important than the written word. It tells the story of four people. Studd, fifty-three at the start of the novel, spends his time making mixtapes of various sounds but he also suffers from thomasberharditis, which means he lives and see the world through the eyes of the Austrian novelist Thomas Bernhard (and partially through the eyes of Krapp from Beckett’s play Krapp’s Last Tape). Bernhard, who died three years before this novel was published, is a key character. He is writing a huge novel which, at least, initially, is called The Daughter of God is No Longer the Sister of Christ (it changes its name several times), influenced by a photo of the composer Anton Bruckner. We also have Kevin O’Bryan who wants to display Bernard’s novel Beton (Concrete) in Letraset and Studd’s god-daughter who continually reads the same two books, though no-one, including the reader, knows what they are. The book is full of complicated lists, total nonsense, lively images, plays on words and lots of humour. I enjoyed it immensely but I doubt whether it will ever make it into English or, indeed, any other language.