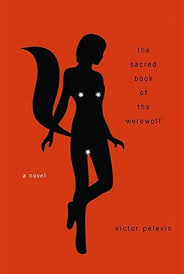 The latest addition to my website is Victor Pelevin‘s Священная книга оборотня (The Sacred Book of the Werewolf). This is another of his books where the main characters of the book are in fact animals, albeit in human form. A Hu-Li, the main character, is a prostitute working in present-day Moscow but she is also a two thousand year old fox. She takes human form – she looks like a young woman aged between fourteen and seventeen – enabling her to work successfully. She disguises her foxness by waggling her tail which has a hypnotic effect on humans. When something goes wrong – a client falls out of the Moscow hotel window where she works – she has to change her modus operandi. Working from the internet, she has a client who likes to be beaten with a knout. When she is too enthusiastic, as a result of his sexist remarks, she comes into conflict with the police. One of the police officers turns out to be a wolf, with pretensions to being the sacred werewolf but the fox-wolf pairing initially works – they fall passionately in love – but then both realise that this is probably not going to work. Inevitably, Pelevin is highly critical of the current political and moral situation in Russia and, with A Hu-Li’s sister married to an Englishman and the traditional English love of fox-hunting, the English do not escape his satirical pen. Post-modernity, language games and a fair amount of obscenity are the usual par for the course. It does very much drag towards the end, as Pelevin cannot decide how to wrap it up but it is still not a bad read, though certainly not his best.