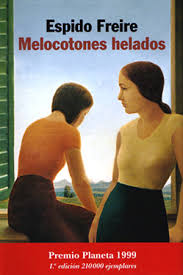 The latest addition to my website is Espido Freire‘s Melocotones helados [Frozen Peaches]. This is a complex multi-generational novel which won the Premio Planeta in 1999. The first generation focuses on Esteban, who fought on the Franco side in the Spanish Civil War. At the end of the war, he goes to Desrein (all town names are fictitious)to visit and console the wife of his fallen comrade, José, and falls for the wife’s fifteen-year old daughter, Silvia. They ask him to stay to help set up the café they own, which he does but he finally returns home to Antonia, the woman he had met back home in Duino. They marry, run a bakery in nearby Victo and have three children: two boys, Miguel and Carlos, and a daughter, Elsa. When she is nine, Elsa disappears. She is never found. We are given various suggestions for her disappearance and only find out at the end of the novel what happened to her. Freire make a big point about how she has been forgotten, despite the fact that both Miguel and Carlos have daughters called Elsa. We follow these two Elsas – big Elsa, Miguel’s daughter, and little Elsa. Little Elsa is a misfit and joins a cult while big Elsa is very conventional and becomes a portrait painter. When big Elsa is seemingly targeted by the cult, she leaves and go and stays with her grandfather (now a widower) in Duino, where he now lives. She struggles to adapt, particularly as her faithful but boring boyfriend is not much help. Meanwhile little Elsa has fled from the cult and is prepared to testify against them, a very risky business. The novel is far too complex to begin to explain in a short paragraph but Freire’s ultimate point is that we are turning in on ourselves and the sense of community, of family and remembering those we have lost is disappearing. It is a very fine novel which sadly, has not been translated into English.