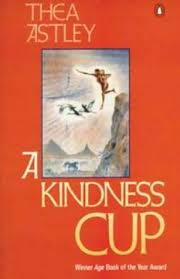 The latest addition to my website is Thea Astley‘s A Kindness Cup. Astley deals directly with violence in this novel. The story tells of a group of white vigilantes in the early part of the last century who set out to teach a band of aborigines a lesson (nominally for stealing a baby, which they almost certainly did not do) and end up killing seven of them, including a woman. There is an inquiry but it is a mere formality and leads only to a mild reprimand. Some people in the town were and are very much opposed to these vigilantes but seem helpless against them. Twenty years later the town is celebrating a jubilee and one of the men opposing the vigilantes, a teacher called Tom Dorahy, returns to the town he had left, with the express intention of bringing the massacre up and seeking justice and/or revenge. He tries to gain the support of the others who were sympathetic but they are not too enthusiastic and are no match for the strong and still violent vigilantes. It is a strong message from Astley about how the good people are too weak or too afraid to confront such violence and how most of the town’s inhabitants want to pretend it never happened, put it all behind them and carry on with their lives. 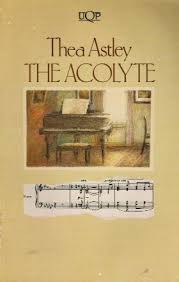 The latest addition to my website is Thea Astley‘s The Acolyte. This novel is now out of print in the UK and US, which is a shame, as it is an excellent novel about both an artist who is thoroughly self-centred and a man who has no sense of purpose and worth, who becomes the acolyte of the artist. The artist is Jack Holberg, a blind musician, who starts out as a performer but becomes a celebrated composer. The acolyte is Paul Vesper, a man from a middle-class family, who has no idea what he wants in life or what career to follow. He drifts into engineering, almost drifts out of his studies, but carries on and gets a job, at which he is clearly not happy and which he eventually leaves for good. All the while he and we are following the rise of Jack Holberg, a man who uses his blindness, both to attract women – he takes Hilda, who was seemingly engaged to Vesper, and uses her as he uses everyone else – and to control and abuse others. Despite this, Paul hangs on, aware that he is merely a follower, perhaps, as someone calls him, Holberg’s eunuch. Astley tells her story very well, with a good supporting cast, also caught up in the Holberg sphere. 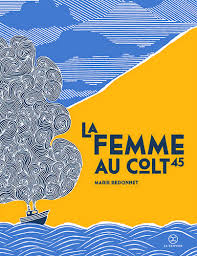 The latest addition to my website is Marie Redonnet‘s La femme au Colt 45 [The Woman with the Colt 45]. Redonnet seemed to have stopped publishing but she has now appeared with a new novel and a new publisher. This novel is even grimmer than some of her previous works. It is set in two neighbouring and fictitious countries: Aziria and Santaria. Lora Sander and her husband Zuko ran the Magic Theatre in Aziria but it has now been closed down by the authorities and Zuko arrested, as the plays they put on were too critical of the dictator and his regime. Lora manages to flee to Santaria, illegally crossing a river between the two countries. However, Santaria is not much better than Aziria and Lora is raped and abused by various men, despite the Colt 45 she carries, inherited from her father. In the end, what matters to her most is finding out who the real Lora is, as opposed to the actress hidden behind the mask but much of the novel is about the abuse and violence women suffer during time of war and political instability as men take advantage of the lack of rule of law. Redonnet makes her point but this novel is certainly not an enjoyable read. 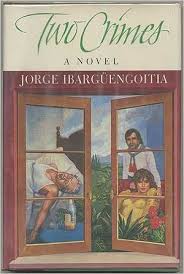 The latest addition to my website is Jorge Ibargüengoitia‘s Dos crímenes (Two Crimes). This is another mocking satire of Mexican mores by Ibargüengoitia, this time somewhat subverting the conventional detective story and taking as its premise that, perhaps inevitably, that the dividing line between the police and the criminals is thin to non-existent. Marcos González and his partner are celebrating their fifth anniversary together when a fellow activist, whom they do not particularly like, arrives at 1 a.m. and asks for a bed. They put him up and leave him there next morning when they have to go to work. While at work, they learn that the police have raided the flat, arrested the activist and are looking for them. Both flee to different relatives in remote parts of the country. Marcos, whose story we follow, goes to his rich Uncle Ramón, where he finds that his four cousins are trying to protect their inheritance, as Ramón is childless and in ill health. Marcos concocts a fanciful scheme about a creolite mine which will, in theory, earn Uncle Ramón several million pesos for an investment of one million pesos but, in fact, is a scam to enable Marcos and his partner to get money to hide out for a while. Things get complicated with the two crimes of the title, but, fortunately, the Mexican police are less than honest and various deals are made all round, so most of the characters, though not all, come out reasonably all right.