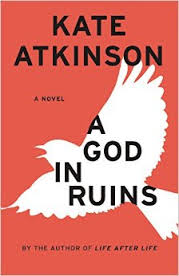 The latest addition to my website is Kate Atkinson‘s A God in Ruins. This is a follow-up to her quirky Life After Life. That book featured Ursula Todd. This book, which also features Ursula Todd to some degree, is primarily about her younger brother, Ted, and his daughter Viola. Apart from a little bit at the end, there is none of the quirkiness of the earlier book, though the chronology does jump around a bit. Ted is the Voice of Reason, a thoroughly decent, honest, nature-loving man who also happens to be a bomber pilot in World War II, something that causes him a certain amount of guilt, when he realises to what extent he has been bombing ordinary civilians rather than military targets. We get considerable detail about the bombing raids into Germany – Atkinson says, in an afterword, one of her intentions was to showcase the Halifax bombers which had been overshadowed by the larger Lancasters. However, the book also deals with the issues of moral responsibility and, as she says in the afterword, the Fall of Man (from grace). We follow Ted’s life from 1925, as a young boy, till his death in 2012, as well as the lives of his siblings, all of whom he outlives, his daughter Viola, not a nice person, her two children and other family members. Atkinson clearly wants to show, as she did in Life After Life, the effect on the various family members of the actions of their family as well as the effect of what she calls absences due to (untimely) death. It is a thoroughly enjoyable tale and a worthy successor to Life After Life.