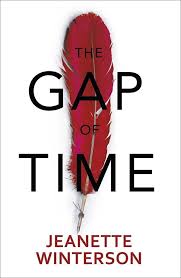 The latest addition to my website is Jeanette Winterson‘s The Gap of Time. This is the first in a series of reimaginings of Shakespeare’s plays by well-known novelists. Winterson has chosen to do The Winter’s Tale, because, as she says, it is about an abandoned baby and she was abandoned as a baby. Winterson certainly reimagines the play. She sets it in the UK and the US in the present time. Leontes, the bad king, becomes Leo, a banker turned hedge fund owner. Hermione, his wife, becomes MiMi, a singer. Antigonus, who carries the baby to Bohemia (here New Bohemia, a New Orleans-type town) becomes Tony González, a gardener. Polixenes, the friend and later the enemy of Leontes, becomes Xeno a video game designer.

The book starts with the death of Tony González, killed by thugs (Exit, pursued by a bear in Act III of the play) and Shep (an African-American piano player) and his son, Clo (Shepherd and Clown in the play) rescue the baby, Perdita, and bring her up. Meanwhile, in London, Leo is insanely jealous of Mimi, thinking that she has been having an affair with Xeno and is pregnant with his child. This is the child that will become Perdita. Winterson has said that she wants to fill in the back stories and she does both with more of Leo’s jealousy and the happy life of Perdita, Shep and Clo. As in Shakespeare, it all ends more or less happily. However, as this is not one of Shakespeare’s best plays and Winterson’s attempts to fill in the gaps do not amount to much, it is not, in my view, a great success. An interesting attempt, perhaps, but not much more.

This is by no means the first time this has been done. Numerous novels have used Shakespeare’s plots. The BBC produced four modern retellings of Shakespeare plays a few years ago. And Kiss Me, Kate remains one of my favourite musicals. Future novels in this series include Howard Jacobson doing The Merchant of Venice, Anne Tyler doing The Taming of the Shrew (but, presumably, not like Kiss Me, Kate – see cover at left), Margaret Atwood doing The Tempest, Tracy Chevalier doing Othello, Gillian Flynn doing Hamlet, Edward St Aubyn doing King Lear and Jo Nesbø doing Macbeth. Some seem more interesting than others. Now if they had someone doing Macbeth, with Alex Salmond as Macbeth and Nicola Sturgeon as Lady M or Michel Houellebecq doing Hamlet, that might be worth reading. Just a thought.

This is the five hundredth English novel on my site, a figure which is totally unjustified in terms of the relative value of the English novel compared to the novel of other nationalities but I make no apologies for it.