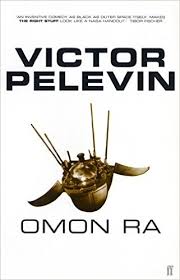 The latest addition to my website is Victor Pelevin‘s Омон Ра (Omon Ra). This is a fairly conventional satire on the Soviet space programme. Omon, the hero (named after the acronym for the special police squad – his father is a police officer) dreams of becoming a cosmonaut. He and his friend Mityok, who wants to fly to the Moon, apply to and are accepted at a cosmonaut academy, only to find that the Academy is named after a Soviet war hero who had his legs amputated below the knee and cadets are expected to undergo voluntary amputation to show their Soviet heroism. They also learn that the Soviet space programme is not as sophisticated as they thought. The Soviets want to send an unmanned spaceship to the Moon, to explore a geological fault on the dark side of the Moon. However, they do not have the technology to separate the rocket, to operate an unmanned rover remotely or to return a man from the Moon. As a result, men are used and these men will die (a hero’s death, of course). When Omon and Mityok find this out, they try to withdraw and but that is not an option. We follow their very basic and amateurish training and the even more amateurish flight. It is a witty satire on the Soviets and their space programme but not much more than that.