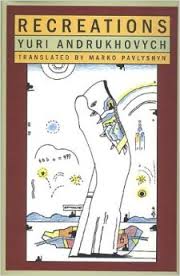 The latest addition to my website is Yuri Andrukhovych‘s Рекреації (Recreations). This is a thoroughly enjoyable anarchic take on the first day of Festival of the Resurrecting Spirit in Chortopil (it means devil’s town). We follow four poets, who seem to be more interested in alcohol and sex than poetry. Two come by train – the gay Khomsky and the hope of Ukrainian poetry, Rostyslav Martofliak, while the other two manage to hitch a lift from an expatriate Ukrainian doctor, now living in Switzerland. The festival is partially based on the recreations of eighteenth century Kiev students, which involved dramatic and poetical performances. Once they get to the festival, they are more interested in drinking – seriously drinking – as well as eating and endless what Marta, Martofliak’s wife, calls prattling, on poetry, politics and people. But we do learn about expatriate Ukrainians, about the mass deportation of Ukrainians to Kazakhstan after the war and a lot about contemporary Ukrainian literature. However, above all, this is a witty, lively and rambunctious romp through a somewhat dubious festival and through at least part of what contemporary (i.e. mid-1990s) Ukrainian culture and life looks like.